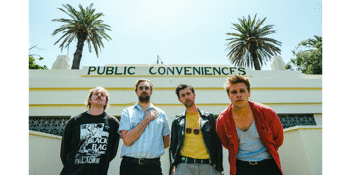 A. Swayze & The Ghosts will embark on a world tour around Tasmania to once again feel the rush of playing instruments in front of living creatures. Come one, come all, leave your houses safely and re-enter the world in all its glory.

Over the last two years A.Swayze & the Ghosts have performed at Falls Festival, Splendour in the Grass, The Great Escape, BIGSOUND (in many ‘best of’ lists across STACK, triple j, Double J, The Music), A Festival Called Panama and Boogie Festival. As well as shows alongside Shame, Total Control, Nude Party, Frank Carter & The Rattlesnakes, West Thebarton, Jet, The Vines, Batpiss & The Stems to name a few. The band have been championed overseas by BBC 6 Music, Beats 1, KEXP, CLASH, NME, Brooklyn Vegan & more, whilst on home soil, supported by community radio, triple j Double J, The Music Beat & more.